Electricity demand and emissions continue to grow, plus a closer look at Tasmania

The April 2016 Carbon Emissions Index (CEDEX®) Report by pitt&sherry; and The Australia Institute (TAI) indicates that electricity generation, demand and consumption continues to be on the increase nationally following a seventeen month trend. The total annual demand in the NEM is now 2.5% higher than the low point recorded for the year ending February 2015. This rate of demand growth was considered normal for the electricity industry up until 2004, but has not been seen since that time.

As a consequence, emissions from electricity generation have increased once more to an annual level of 5.5% higher than in the year to June 2014. The emissions increase continues to be driven by growing black coal generation in Queensland, to supply the rapidly growing demand in that state, and more modest increases in NSW to make up for steadily falling imports of Queensland black coal electricity.

Renewable energy generation continues to increase, now at 13.2% to March 2016, its highest level in decades (excluding the carbon price era). A third solar farm at Moree on line from late February is now contributing to the overall renewables along with hydro and wind.  The three large solar farms, all in NSW, contributed 0.7% of NSW generation and 0.2% of total NEM generation in the month of March.

Electricity use in the Queensland coal seam gasfields continues to be the main driver of demand growth in the NEM.  Additional annual demand to power production in the Queensland coal seam gas fields reached about 4 TWh, a 9% increase in total state demand from the level of November 2014, when the shift to electric motor drive in the gasfields began.  Abnormally high average summer temperatures across the mainland states, extending into the first two weeks of March, will also have contributed to demand growth. Upticks in consumption for NSW, Victoria and South Australia were in alignment with high temperature days.

A closer look at Tasmania as the winter months draw near

With Basslink now unlikely to be operational until early June, the onset of the colder winter months presents a greater challenge to electricity supply in the state.

Demand for electricity in Tasmania is dominated by a handful of large industrial users, which normally account for about 60% of total annual consumption.  If this consumption is distributed uniformly across the year, a very marked seasonal pattern is seen in the remaining demand, by general business and residential consumers,  Figure 1 shows this pattern for the financial year 2014-15.  In normal circumstances, electricity demand would be expected to increase sharply within a few weeks from now, in late April and May. 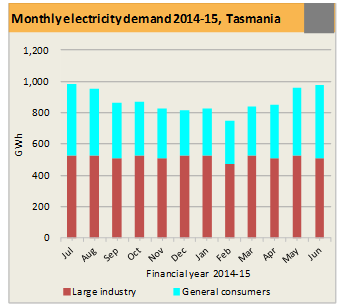 Figure 2 shows the breakdown of energy generation from hydro, wind, gas, diesel and Basslink. The negative Basslink values represent net exports to Victoria, prior to its failure.  It is evident that hydro and gas still remain the primary sources of energy for the state. While there has been an earlier-than-expected return to production of a 57MW gas unit at Bell Bay, the balance of this expected growth in demand will need to be met by the 200 MW of emergency diesel generator sets, together with any inflows into the hydro system and wind.   The contribution which large users are already making to reducing demand can be seen by comparing demand in March 2015 in Figure 1 with supply (and therefore also demand) in March 2016 in Figure 2.

Electricity is by far the most important source of energy used by Tasmanian homes and businesses for winter space heating.  When the immediate crisis is over, Tasmania has a good opportunity to reduce future winter residential electricity demand, while also reducing householders’ costs and improving their thermal comfort, to households and improving thermal comfort by upgrading the energy performance of its housing stock and shifting to more efficient heating equipment. 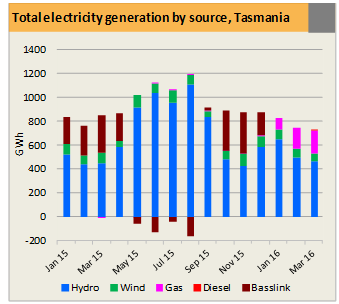 Dr Hugh Saddler, Senior Principal – Energy Strategies at pitt&sherry, said that “The research we have conducted in recent years has shown that the use of modern reverse cycle air conditioners is a far more economic option for heating than electric resistance heaters and produces less emissions, compared to gas, even in mainland states dependent on coal fired power stations.“

On the supply side, increased generation and faster uptake of rooftop solar generation should also be important components of any plan to provide enhanced electricity supply security for the future.

For more information please click on the link below: